Ed Gein is now all alone at the farmhouse, without mother around, he can now dive into his curiosities of women.  He would go to the local book store and purchase more of his Detective Magazines (he used to have to have to hide from Augusta) and books on the anatomy of women, head hunting and resurrection.  He was already semiskilled at taxidermy, so why not branch out and make his own love doll?

While Ed boned up on how to shrink heads, learn all the parts of a vagina and how to outsmart the police, He would baby sit for the locals.  Some boys he babysat for discovered some of his shrunken heads that were not very “shrunken” and Ed played it off as a gift from overseas.  The parents dismissed what their kids seen and Ed was off the hook from suspicion of any wrong doing.  After all, it is just “Weird Ed”, the man that loves to tell ghost stories and get the kids all geared up.

Some of his neighbors were not as trusting and some had feared Eddie.  One time Eddie had dinner with a local family when they had a female guest relative over.  Eddie would stare at the young girl as though he were undressing her.   A stranger had broken in their house one night when the folks were sleeping and a young boy in the house was choked out from the attacker who was asking him questions of the whereabouts of the young girl visitor.  The boy later said the attacker looked like Eddie Gein when questioned by his parents.  Ed was never invited back to their house for dinner or any other event and the incident went unreported to authorities.  Other women told stories of hearing noises outside of their window and thought they had seen Eddie as a peeping tom.

Eddie was now living in complete filth, like a hoarder.  Eddie Gein would sink his fingers in a can of pork and beans to check to see if it were warm enough to eat.  He would light his oil lamps and read up on the female anatomy and started doing experiments.  He had a mentally ill friend who helped him dig up some graves in the grave yard, Ed explained that he needed them for experiments and would put them back when he was done.  It was time to resurrect Momma and (like Jesus Christ) she would return to the world to save it as momma was nothing less than a Saint.

Augusta would recite from memory, Proverbs:

The lips of a strange woman drop honey, and her mouth is smoother than oil: But her latter end is bitter as wormwood, Sharp as a two-edged sword.

Now therefore, my sons, hearken unto me, and depart not from the words of my mouth. Remove thy way far from her, and come not nigh the door of her house.

For why shouldest thou, my son, be ravished with a strange woman.  And embrace the bosom of a stranger?

He could hear her words as she spoke from the Bible:

So he carried me away in the spirit into the wilderness: and I saw a woman sit upon a scarlet coloured beast, full of names of blasphemy, having seven heads and ten horns.  And the woman was arrayed in purple and scarlet coulour, and decked with gold and precious stones and pearls, having a golden cup in her hand, full of abominations and filthiness of her fornication: and upon her forehead was a name written: “MYSTERY, BABYLON THE GREAT, THE MOTHER OF HARLOTS AND ABOMINATIONS OF THE EARTH” 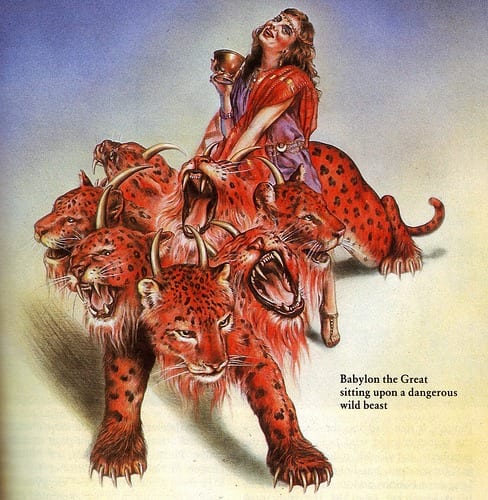 It was believed that the first woman Ed Gein took from the grave was his mother.  Eddie would carve out the vagina and anus and skin the breasts from the torso and the rest he would cut up for meat, except the face.  Eddie painted momma’s vagina silver because her’s was special.  He would peel off the face or save the entire head to keep him company and he would put lipstick on them, that way they would be dressed up for dinner.

Eddie would use the skin to make lampshades, upholster chairs, decorative masks for the wall and even had full body suits to wear while he beat a drum to the light of a full moon during his rituals of resurrections.  He danced the night away, dressed in the flesh of a woman.  He had his own version of cross dressing. 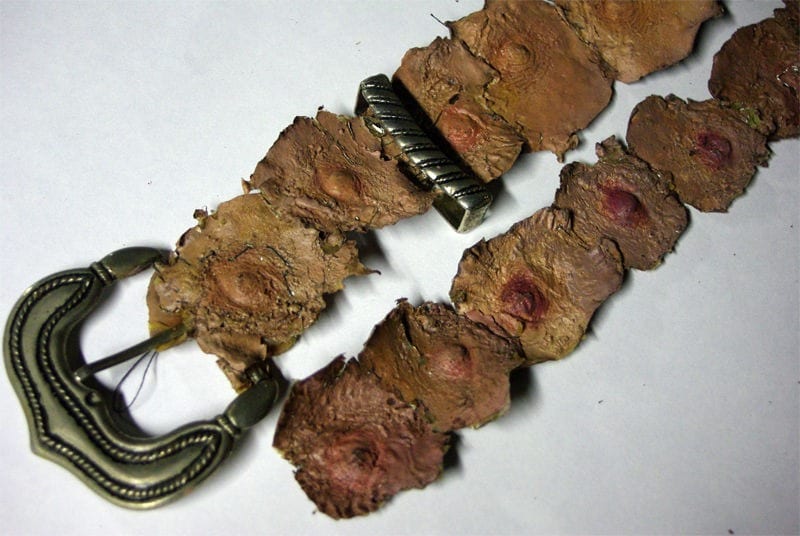 He even had a nipple belt, maybe it looked like this?

Ed Gein’s inventory of fleshy treasures around the farmhouse included:

Eddie was about to add to that growing collection with a real live woman, not the dead kind no more, they smelled too bad…

His friend that helped him finally was committed to a hospital for the mentally ill, so Eddie was on his own but by then he had a system down.  Eddie would read the obituaries in the local paper and get them late at night just after they were buried that way the dirt was softer and easier to shovel.