When I was a kid, 10 years old to be exact, I was in a pretty nasty accident that included me on a bike and a Ford Bronco.  The Ford Bronco won.  While laid up in a hospital bed for an extended period of time, I was given a set of Mego Super Heroes from my parents and I was thrilled!  The selection was astounding as Mego had you hooked to buy more and more. 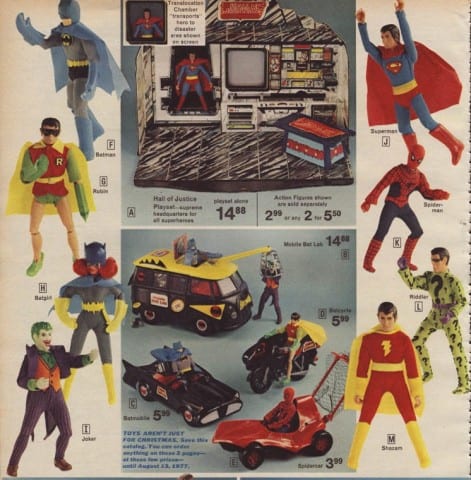 Superman, Spiderman as well as Batman and Robin were perfect for entertaining oneself when you can’t get out of bed.  They were great!  Although, even as a kid I never liked the gloves they put on Batman and Robin. (I mean really, they looked like mittens and hindered using their hands for anything) Did I mention the selection?

What costs a few bucks back in the 70’s now can put you back 65 dollars or more for these action figures mint in the box.  For remembrance of that awful time in the hospital and the joy these figures brought me, I have added Superman, Spiderman, Batman and Robin to my personal collection.

Mego also put out figures for Tv Shows as well.  I had “Planet of the Apes” figures that my neighbor and I would play with.  One could purchase Sonny and Cher, Happy Days with the Fonz as well as other celebs like Farrah Fawcett.   We all remember what Farrah’s poster did to every male adolescence in America…

“Johnny, why is your door locked?”