The Ouija Board is a funny topic because I’m not sure if I should put it in with the Paranormal, Horror or Toy section.  My choice is the Toy Section.  Why?  Please people this is no more of a paranormal item than “Shoots and Ladders” also owned by Hasbro.    So many people including my own family tell me “Don’t get a Ouija Board, it will bring bad spirits!”  They are not alone, many people believe that.  Why?  Because they don’t understand the science behind the game.  This article will reveal the secrets behind the game, but even though I will debunk the reason why it works, people will still claim I am wrong.

First a bit of history.  The Ouija Board was created by Elijah Jefferson Bond, an American inventor and lawyer, in 1890. the Ouija board was regarded as a harmless parlor game unrelated to the occult until American Spiritualist Pearl Curran popularized its use as a divining tool during World War I.  Then patents were bought and sold, it wound up in Parker Brothers hands and eventually sold to Hasbro, who now owns the patents.  If you want to really go deep into this area, see: museumoftalkingboards.com 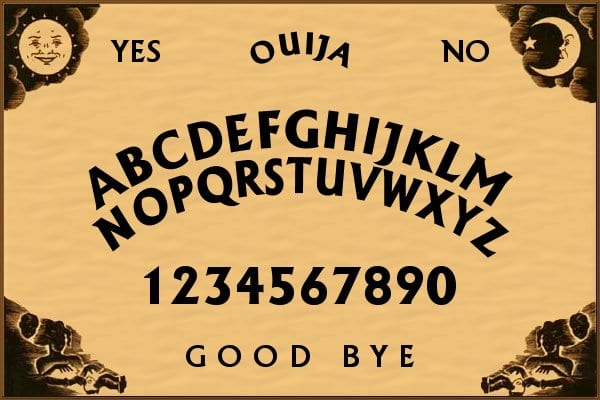 Basically the name “Ouija” came from  Charles Kennard in 1850 who formed the Kennard novelty company, with two business partners, which produced these boards, he called it the “Ouija”, he thought this meant good luck in Egypt, but later found out this was not true. It is probably of a combination of the French word oui and the German word ja both meaning “yes”.

What makes the pointer move? An effect similar to that which occurs in dowsing, known as the ideomotor effect. This is a fancy name for involuntary/unconscious movement, such as a dowser’s hand flicking enough to move his stick when he passes over an area, he knows has water.  The basic point is that your muscles can move without your consciously thinking, move to the word YES.  Suggestions can be made to the mind by others or by observations. Those suggestions can influence the mind and affect motor behavior.

What is purely physiological, however, appears to some to be paranormal. In other words, if you believe this stuff and are trying to get the spirits to answer questions proving that they are all-knowing, and you ask a question that you already know the answer to (for example, “What’s my father’s name?”), odds are that your own hands will do the rest by spelling out your answer. That’s where trying it blindfolded comes in (provided you haven’t memorized the board, obviously). If it’s spirits, they should be able to guide your hands no matter whether you can see or not. But if it’s you doing it unconsciously, the blindfold will screw things up.

I can hear the people fuming and getting ready to send me hate mail now.  I know this because the Ouija board told me so…